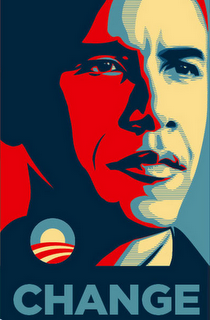 Well done President Obama... It's not often I hand out Duckhouse Awards to Presidents, and don't intend to make a habit of it, but having worked in Uganda, East Africa during the 1960's - before the Ugandan Asian population was removed by that wicked, wicked old despot Idi Amin.
I have to commend the US President in his attempt to get the locals to actually do something for themselves and not rely almost totally on external aid, expertise and resources.

Obama was speaking in Ghana, but his words equally apply to the whole African continent. With some assistance, Africa could easily feed the rest of the world as well as feeding and caring for its own populations. In the future it might not just be an option but a requirement as certainly the UK is already unable to feed its own from locally grown foodstuffs.

The demographic timebomb will see an ever ageing UK crusty population, so it will become an urgent need as the available workforce shrinks and we become a nation of stroppy zimmer frame urban terrorists, with souped up mobility scooters striking terrror into the younger out-of-control generations (OK, got a but carried away, but you get the idea...)

Back in Uganda, Africa, the previous presidential incumbent Dr Milton Obote was not much better than Amin, but at least didn't embark on a wholesale massacre of rival tribes. It seems that the US President has been telling the African nationals a few home truths, to accept change and in effect stand on their own two feet." Yes you can," neatly borrowing from his own winning campaign. The major hurdle is that corruption is an art form at all levels and tribalism not democracy is the defacto ruling way of life.

True in Uganda, the Brits installed the Westminster model of Parliament and indeed a splendid smaller stripped down replica of the House of Commons stands proudly in Kampala. They even had a bewigged Speaker! However after a while they could not see the idea of sitting opposite each other and all the elected politicians decided to cross over and sit on the same side in the same Party!

It could just be that Obama playing on his own Kenyan roots can pull this one off. Certainly the aid will need to continue but rather than the cyclical feast and famine regime, a groundswell of local pressure might just kickstart the whole process.

It is equally galling that when I was there Malaria had just about been beaten, subsequent wars and the breakdown of even the most basic sanitary systems ensured this killer disease became a massive concern and virtually at one point out of control.

In Ghana President Obama said: "Africa was not separate from World Affairs and in effect the solution would be in their hands," time will tell , let us hope it's not to late for any of us.