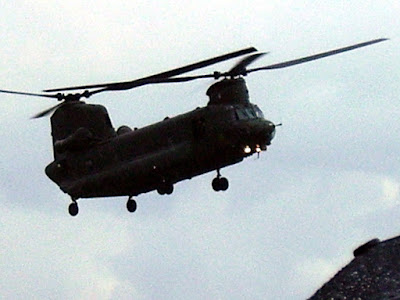 What Brown fails to mention is that serious terrorist groups have already moved their top operations and finance channels to other countries such as Somalia and any other country where corruption is a way of life. Our so called NATO allies have frequently reminded Brown they consider Afghanistan to be a peace keeping operation.

The British maintain the ground rules have changed and it is now a full blown War. Trouble is our so called allies are sticking to the original operations rules of engagement and not entering into the idea of a full scale war and as a result not willing to take on some of the duties and daily firefights the British under resourced and ill equipped are daily facing.

Yes it is true some of our allies are tucked up in bed each night and only patrol during office hours. Few if any of our NATO partners engage in face to face fighting and other aspects of all out warfare.

As to the idea that we are stopping the terrorists hitting the UK streets - pure rubbish. Just cast your mind back to what the IRA did in London and other mainland cities with scant resources, bucket of SEMTEX & some cheap watches. They even popped a home made rocket into the back garden of Number10! Sleepers, terrorist cells and other aspects of insurgency already exist and are well established over several generations in mainland UK.

If the troops do return to the UK. Gordon Brown will wrestle with his personal demons and dramatically see all this as a failure. Which of course it is, but then he would earn substantial brownie points from the third of the surveyed population who are currently undecided about Afghanistan (oh did I really say that?) He does after all have the ability to ‘walk on water’ - well in his one eye anyway.

The best Brown can now do is to be that "big man" do an abrupt about turn - he could say it was being done in light of new intelligence - bring all the troops home, deploy them all around the UK and substantially beef up the terrorist, police and immigration control operation within this island.

No visas for students over 19 years of age and a bond of £5,000 to be lodged with the UK government, forfeited if any of the Student Visa restrictions are broken or removal from the UK is ordered. Close down all so called language schools unless they are subjected to Department of Education independent audits and classes, lectures take place on a recognised campus.

Be assured that any police we do train for operations in Afghanistan, are all blood related in some way to the growers of opium yielding poppies. A stoned, drugged up Afghanistan police force is hardly the basis for an ongoing imposed democracy and a stable justice system. But that in effect is what we are getting for our so called investment in Afghanistan.

By all means let us hear the results of the presidential elections and then give notice we are withdrawing within three months - just twelve weeks.

It will create a vacuum and we only cover a small part of the country anyway, but something akin to a local version of democracy will rapidly fill the void, as it will anyway over time if we are still sending our troops to be blown up, two by two, as seems to be happening day after day as the pictures from the village of Wooton Bassett show.

Maybe Brown should be mandated to attend each and every coffin return, along with his lacklustre Cabinet of dubious talents and the seriously ‘out to lunch’ Defence Secretary. Clearly a man well out of his depth, and not coping well with high office. If not. the USA idea of air strikes and bombing runs, not unprotected soldiers lives will be the order of the day.

The ‘tipping point’ was passed the day the first coffin returned to the UK and the good citizens of Wooton Bassett realised Gordon Brown’s Government would not wish to draw attention to it by putting on a formal homecoming so the village did and have been doing so almost on a daily basis ever since.