Ford Motor Company of America to the Rescue 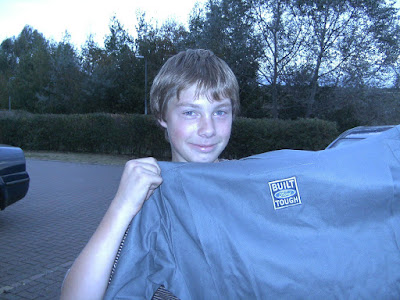 
Like most teenagers, Josh Smith adds to his pocket money and saves by doing an early morning paper delivery round, he helps out his family and also tries to find the funds to get fully kitted out for sports, fishing and his mechanics class at Stanground College, Peterborough. Cambridgeshire, England,

During this recession and for a long time to come, times will be tough for many British teenagers and adults alike, future employment prospects will remain bleak for the untrained. For this reason Josh Smith, 15, thinks his mechanics classes are extra special; anything to do with engines and what makes them work is his passion. He intends to qualify in a few years time as a professional mechanic, but already helps the racing teams at Peterborough Speedway.

Still too young to pass his UK driving test, Josh is equally passionate about motor cars. He was disappointed to be told by his teachers that for ‘health and safety’ reasons, he must buy an expensive full set of mechanics overalls, rather than the old clothes he’s been wearing for his mechanics class. He’d saved money from his newspaper delivery round, but that was already earmarked to renovate his bicycle which had been repeatedly vandalised and badly in need of new tyres, lights and brakes!

Indeed the bike had got so bad that he would regularly ask Julian Bray, one of his early morning newspaper delivery customers in Stanground, if he could borrow an air pump to stall a slow puncture.

On hearing Josh Smiths’ plight and fearing that he might be barred from the mechanics class for the want of some overalls, Julian Bray contacted the mighty Ford Motor Company in the USA, asking if they could help out? Immediately John J. Nens, Director Global Brand Licensing Office Marketing, Sales & Service together with Fords’ International PR & Social Media Director Scott Monty offered to see what could be done.

Within days they sourced from the USA Ford Collection ( www.fordcollection.com ) a set of ‘Built FORD Tough’ professional coveralls and had them express airfreighted by Fedex within three days to Josh in Peterborough, England.

Julian Bray commented: “During the winter and throughout the year, Josh without fail every morning delivers our newspapers, even when we were snowed in and other delivery services cancelled. He’s hard working, always cheerful and a real credit to young people, I’m really delighted he’s now fully kitted out with these professional overalls and can properly and safely enjoy his mechanics class. I am equally pleased that Ford Motor Company in America answered this call and very impressed by the speed and generosity of their response”

The City of Peterborough, England has a long association with mechanical and automotive engineering. Henry Royce was born in the City and later formed the iconic Motor car company with Charles Rolls. Perkins diesel engines are also located within the City,