The cruise ship now leaving the Port of Cambridge 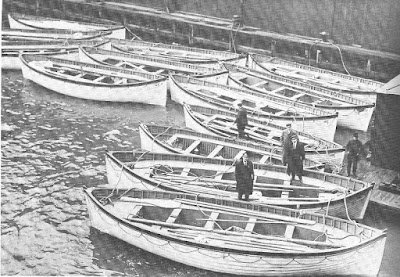 Lifeboats from RMS Titanic recovered by SS Carpathia, lifeboats had the RMS Titanic nameplates removed before they were deployed to other White Star Line liners

Watching the unfolding problems of Biblical proportions caused by flash flooding in Queensland, Australia makes you wonder what would happen here, particularly as this government seems to be unable to even pass simple legislation to control gigantic cash payments to unworthy bankers, writes Julian Bray.
A recent report suggests that the City of Cambridge might well in years to come, be a Port on the coastline for a vastly reduced UK landmass. The UK Environment Agency has been banging on about flood prevention for well over a decade and even eight years ago admitted that in some areas nature would take its course and that much of coastal UK in years to come will be flooded and at least 14 feet under water from present day levels.
So where does this leave us? The obvious answer is only invest in property and businesses located on high ground and take any reassurances from politicians on flood prevention with a very large pinch of salt. The benchmark or tipping point will be when insurance companies collectively decide they have had enough and no longer include any form of flood, landslide, slip and heave cover in future policies. Five years should do it.
At the moment there is a 'nod and wink' situation with the Insurance Industry but as the Coalition Government continues to beat itself up and some not so honourable MP's feel HMP Wandsworth cell doors clank shut behind them, don't expect too much by way of a political solution.
Ironically, the recession has hit construction hard and the number of new building starts has dropped sharply. This in turn has helped preserve flood plains being concreted over, water meadows retained and helped arrest the ingress of water. Against this you have the money-grabbing revenue free-wheeling generation activities of the privatised foreign owned water companies. If ever an industry was ripe for state control , the water companies are right up there in the forefront.
Shoddy investment and an ever increasing number of burst pipes. The only public owned water company is the one in Ireland, recent news stories on standpipes and water bowsers paint the picture, as the chairman resigns his £250,0000 post it emerges the departing chairman in the 80's had his hands in a Church piggy-bank, placed on trial, convicted, but not physically jailed.
I ran the PR operation for Anglian Region Environment Agency, a decade ago, one of the MP's expenses MPs awaiting trial over allegations of stealing (or trousering) public money by way of expenses claims Ellliott 'Bunter' Morley was ministerially directing the UKs' environmental traffic then. By all accounts he was pretty lardy useless and that was the view of staff working within the Agency. Matters are not much better today, with bankers looting the national coffers and the prime aim of this current coalition being to stay in power longer than 12 months.
Looking on the bright side, well there isn't one, but you can expect house and property prices to continue to tumble over the next decade....but to finish on a parting note. I found out today that magician Terry Seabrooke had died (we Magicians call it a broken wand - a magic wand is ritually broken on the death of a magician) so the fitting ending Terry would say: "Come up on stage and join me, just there, over the trapdoor and directly underneath the bag of cement on a rope."