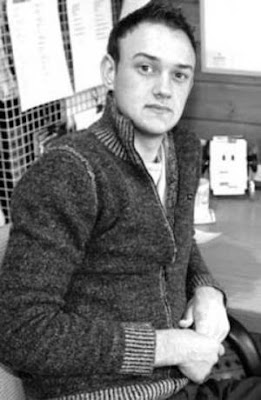 Paul Coxwell aka Paul Paker, convicted fraudster jailed in 2009
http://www.thestage.co.uk/news/newsstory.php/31068/exclusive-jailed-producer-paul-coxwell
Jailed producer Paul Coxwell unmasked following an investigation by The Stage
Paul Coxwell, the young producer who was jailed for a multiple £500,000 VAT fraud claim in 2009, has re-entered the theatre industry, working under the name of Paul Parker.
Fraudster Paul Coxwell aka Paul Parker although disqulified from being a company director until 2013 is named as chief executive of StageLive in a press release for the company, the new venue operator behind the Broadway Theatre in Peterborough, Cambridgeshire.
The Broadway Theatre closed two years ago following a fire but insurance companies at that time failed to pay out as the cause of the fire was uncertain. Many theatrical agents were left out of pocket and artists including comedian Jimmy Carr remained unpaid following the fire as the venues operating company folded but the Theatre owned by one time nightclub and public house owner a Mr Rinaldo Fasulu was shielded or exempted from any debt liability. Many thousands of theatregoers also lost their money.
Paul Coxwell or Paul Parker is also described as chief executive of IQ Global Partners on that company’s website, http://www.iqglobal.co.uk/. Although Paul Coxwell aka Paul Parker is currently disqualified from holding any company directorships until 2013. IQ is said to be the parent company of StageLive, which was 'spun off' earlier this year. Both companies have yet to file any audited accounts and Parker/Coxwell is a major shareholder in both organisations (under the name of Coxwell for IQ and Parker for StageLive) and is listed as company secretary - under the name Coxwell - for IQ Global Partners.
However, the registered addresses given for the two names (Coxwell and Parker) are different. Following an investigation, The Stage Newspaper discovered that Coxwell and Parker are the same person. After The Stage approached Parker earlier this week - and a number of other industry figures who had been unaware that he was operating under a new name - he issued a statement confirming that he was, indeed, Paul Coxwell, but saying he is working as a consultant rather than as chief executive of StageLive.
The statement read: “I am pleased to announce that I have renewed by [sic] involvement in theatre, as a consultant with StageLive Group. I recognise that my previous difficult and adverse actions let a lot of people down, and I hope that having served my penalty I can, once again, look to be involved in an industry I am deeply passionate about.
I am hugely encouraged by the support that colleagues, past and present, have shown and I look forward to continuing to renew these relationships.
“Due to previous adverse media information, and so as to support my rehabilitation, I elected to formally alter my name to Paul Parker. Whilst I will continue to be known under my newly adopted legal name, for the avoidance of confusion I feel it is important to be open and honest of this change.
“Having spent the past two years as a retail strategy consultant with leading international brands, I am embracing the new opportunities and challenges the entertainment business presents. Working with StageLive on its re-launch of the Broadway Theatre is an exhilarating and demanding prospect and compliments [sic] the other clients I continue to work with.
The consultancy relationship with StageLive is not a directorship in any way, due to current personal restrictions, but rather sees me provide strategic advice to its board of directors to support their day-to-day management of the business and help inform their decision making process.
As part of his sentencing in 2009, Coxwell was disqualified from serving as a company director until January 2013. He is not listed as a company director of either company. But under the terms of his disqualification, according to the Company Directors Disqualification Act 1986 “he shall not be a director of a company, act as receiver of a company’s property or in any way, whether directly or indirectly, be concerned or take part in the promotion, formation or management of a company unless (in each case) he has the leave of the court”.
On documents filed with Companies House, he is listed - under the name Paul Coxwell - as wishing to “form” IQ Global Partners, and - under the name of Paul Parker - as wishing to “form” StageLive Group Ltd. Meanwhile, on IQ Global Partners’ website, Parker is described as “the Chief Executive Officer and co-founder of iQ, leading all aspects of the company’s strategic planning, development, and commercial operations.”
On the same biography entry, he is also described as “an Olivier-nominated and 2-time Tony award-winning theatre producer with credits in London’s West End and on Broadway.”
In press material promoting the reopening of the Broadway Theatre, he is also listed as chief executive of the StageLive Group.
In 2009, Coxwell was jailed for nine months at Kingston Crown Court after pleading guilty to making false VAT claims amounting to more than £500,000. According to the court judgment, he did this using “bogus” or “inflated” tax figures. Of the shows on which he was named as a producer before going to jail, Personals - a touring show starring Gary Wilmot - was cancelled two weeks before it was due to begin, leaving members of the creative and technical team owed thousands of pounds.
His subsequent production, the West End show Underneath the Lintel, on which he was a co-producer, saw him dropped from the production by his fellow producers after he “failed to fulfil his financial obligations”. At the time of his arrest in 2007, Coxwell had been working on a stage version of Some Like it Hot, although the project never came to fruition.
Courtesy The Stage Newspaper additional reporting Julian Bray