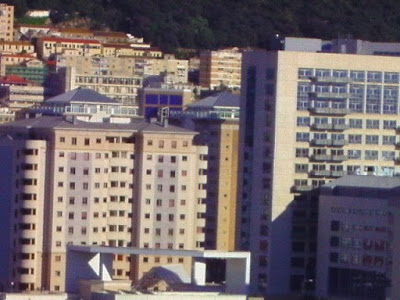 Reclaimed land near the port area of Gibraltar where a 2 bed apartment -
without balcony- is on offer at £200,000

Having just returned from a western med. lecture cruise on the Independence of the Seas (diabolical weather on the way down and Lisbon dropped...) it struck me that the only way to enter and leave the Med is to skirt along the top of Northern Africa, with just a 9 km wide passage at one point.

With the whole of Northern Africa in political turmoil at the moment, it would take very little to bring the Med marine trade, tanker, container and cruise ships, to a grinding halt.. a point not lost on the Gibraltar authorities who deployed fast inshore inflatables with a fully armed contingent of soldiers/police to encircle the ship and to keep a number of small craft at a good distance whilst in the freeport of Gibraltar.

A two bed tower block flat in the reclaimed waterfront area is currently worth around £200,000 and the former Safeways is now a Morrisons supermarket. Locals tell me Spain this Summer is virutally booked solid from June to September and that many US lines are sending all available ships to 'Europe' this summer. Royal Caribbean alone will have no less than 17 ships at various ports of call. 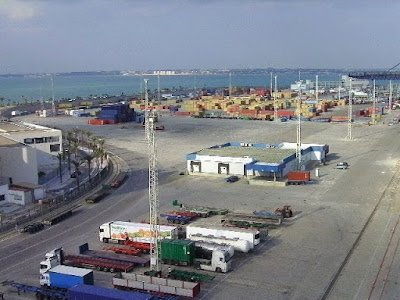 The container port at Cadiz last week clearly shows how trade has slowed down, it was the same at Barcelona and Gibraltar. Acres of empty concrete, where in happier times containers should be stacked eight high.

The fact that Italy has seemingly strong marketing and contractual ties with Libya and takes 25% of Libyan oil, didn't seem to make much of an impact on the Italians, who like us in the UK were bemoaning the rapid rise in food prices.

In Naples, a well dressed local advised that a number of Columbian pickpocket gangs were in operation all around the port area which is currently seeing a much needed bout of contruction and general fascade retention schemes being started. For good measure,a full scale political demonstration was in progress with students furiously waving banners and ranks of riot police waiting discreetly in the side streets defending the regional government buildings.

The unfolding drama in Libya, Tunsia, Yemen is however at the top of the news agenda as hoardes of refugees are heading for the Italian mainland and effectively at large in Europe. No evidence whatsoever of the European Community or the UN taking charge, and what is strange instead of running a series of evacuation flights, huge commercial Grimaldi ferries (capacity 2,000 -3,000 passengers) are just left lying at anchor. It cannot be beyond the power of the authorities, UN or Europe to mass charter a fleet of ferries, add a protective marine shield, safely remove thousands of souls from the effective war zone, they could all then be effortlessly transported to a variety of reception centres in France, Spain, Italy and even Portugal.

But all that is too simple, we have one of Gordon Browns grossly overpaid and under talented apointees in charge of European Commission foreign policy who seems more worried about hiring in PR companies, than rapidly taking charge of a dire situation. Meanwhile Crimestoppers have launched a "Nab the Costa Villians" campaign and already according to my Uk criemestopper sources, two of the UK's most wanted have already had their collars felt, and are now safely in custody - just a few thousand more to go...