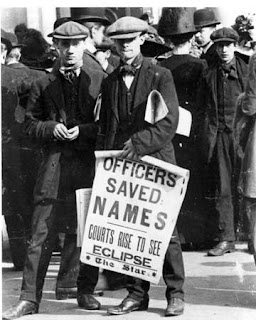 After intensive research, we have created five newly researched lectures and presentational packages on RMS Titanic. All the lectures have been rolled out and presented to large diverse audiences. Feedback has been excellent and the quality of questions at each presentation has been challenging but we fully answered all of them!

The lectures are presented by Julian Bray, Morag Irving joins for the live and totally unscripted question and answer sessions.

Questions are either gathered by pre-completed forms or by using a roving mic in the audience.

Clearly 2011, is a special year, 100 years following the sinking, so we are expecting strong early demand for confirmed dates. The ITV 'Titanic' televsion fictional mini series will also raise the profile of the RMS Titanic story and generate many Radio and TV stands,

Each RMS Titanic lecture is of roughly 40 minutes duration and can either be stand-alone or delivered as a series, we then offer an open house Q&A session.

All lectures are fully supported with layered, animated PowerPoint. For theatre presentations, we would present 2 of the lectures (2 x45 mins.) with an audience interactive Q&A at the end of the second half.

#1 RMS Titanic Films, Myth and Mystery How the Titanic Story is portrayed in films, on radio and in the press. We look at the storytellers and scriptwriters down the decades; their contribution to the Titanic story and myths they created.

#3 RMS Titanic and her Ugly Sisters. Why build one when you can build three? From the Titanic blueprint, two further near identical ships were built, all had the same design flaws and a cut down, money saving cheaper materials specification. Why did the White Star Line board feel the risks were worth taking or did some directors rebel?

#5 RMS Titanic: The unsinkable Molly Brown, so why did she sink? We delve into recently released material to discover the shocking truth behind the sinking of the RMS Titanic, the lack of safety systems, unworkable lifeboat boarding and drills, loading of volatile firedamp bunker coal, faulty rivets and the use of condemned pig iron.

We also have a unique RMS Titanic presentation on Queenstown (Cobh) in Ireland, orginally prepared and presented during the maiden voyage of the Independence of the Seas from Southampton to Cobh.

Elements of the lectures can also be used (without PowerPoint) as an After Dinner Speech or Club presentation.