#royalwedding Didn't they do well! And the infamous Volante appears too... 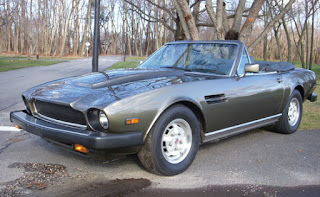 Congratulations all round and well done the cartwheeling Deacon and the Met policeman walking down the Mall inciting the crowd for one extra hurrah! Whilst tweeting on #royalwedding and offering broadcasters worldwide short ISDN feeds of  royal UK street life at Bray Towers, not that far from Cambridge and in the county of Cambridgeshire and a full member of the cambridgeshire Cirmestoppers Committee [thats enough Cambridge Ed] it was only a matter of time before HMQ offered the happy couple the Duke and Duchess of Cambridge.

But back to our tale I seem to remember the very same Aston Martin Volante (one careful owner HRH The Prince of Wales) was often parked outside the apartment of one Captain Parker Bowles, when he was away fighting wars somewhere and Camilla, his wife, was left home alone.

It became so obvious that even Private Eye offered some sage advice on the matter, still nice to see the old girl put through her paces, the car looked good too, although one of them now runs on wine or chip fat cannot remember which...

Also good to see that old dress designs stand the test of time, having seen the Princess Grace Wedding Dress, a quick altertion of the neckline and you have the pattern for yesterdays stunning creation.

There was an exhibition at the Gimaldi Centre in Monaco which then came to London and then off to the USA....Just sayin'!  There were other gems during the day,  NBC's TV anchor Ann Curry in pink wellies as she actually believed she would be treading in 36 inch deep mud around Glastonbury.

Black mark to FoxNews who were on safer ground with the excellent UKorginated SkyTV feed whilst their own imported team did the prep. and wondered where the smog and london trams had gone...but  they hired Paul Burrell, the low life,two faced, self serving lying Butler to the late Princess Diana. Clearly now so out of the loop that his purile comments, to wit:  "The princes' should be wearing Bearskins but have opted for forage caps in the Abbey..... "

I also commend The Beckinghams, Posh spice had actully put on some weight, so you could still see her sideways but wearing black  with a matching magimix blender blade glued to her forehead seemed a bit strange. Lord Becks looked the part and I liked the idea of wearing his gong on the wrong lapel of his frock coat, even if the invitation (you had to show a recent personal bank statement and the invite to get in) didn't say "medals will be worn."

The least said about Fergies girls the better, but The Stage magazine is already advertising for Panto, slight alteration of the make up and you have the Ugly Sisters costumes, perhaps they did come from Bermans who knows?  Shame as the girls are really quite cute.

All in all, the day went off well, the Uk manged to pull off an amazing branding exercise and the US TV networks are now wondering why the paid so much in US dollars for the Portacabins seemingly borrowed from Wimbledon, which overlooked Buck House when the real action was all around the Abbey.

Finally Jon Snow of Channel 4 deserves a special mention who fittied with helmet cam and pushbike scoured the backstrrets of London and hit on a group of Ugandan Girls ands gave them a rendition of the Ugandan national anthem (JS was a VSO in upcountry Uganda living in a hut and volunteering with village girls in the late 60's(?) when I was also working in Kampala).

Shame he didn't comment on the terrible bloodbath currently taking place as you read in that once beautiful East African country and well off the media agenda due to ongoing troubles in North Africa.

But that apart, the old firm, the Royals did pull out all the stops. So "Doors to manual" and let's do it all again.
Pippa (ahhhhh!) and Harry? Go on my son, the world is your lobster or is that just the hair? Still needs a comb through...

Why include a stock photo of an Aston Martin when it is a completely different model from the one that was used on the day?

Fair comment andx you are spot on, however Getty Images control the copyright of the decked out 'just married, Aston martin pictures taken on the day, but hopefully this did not spoil the general thrust of the story...