NO MORE 'SHEDS' FOR PETERBOROUGH 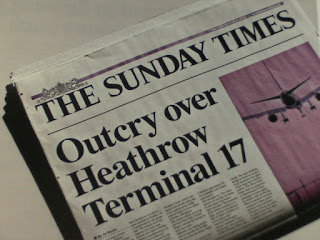 No more ‘sheds’ for the City of …says media commentator Julian Bray
It is amazing how those who make money out of buying and selling warehouses (or ‘sheds’ as they say in the trade) have decided the City of needs a few more, when we already have dozens lying empty acting as vandal magnets.
It gets even better when the author is from the category we all love to hate i.e. estate agents, so step forward one Richard Jonrd, a Director of Baker Storey Matthews. Shed purveyors to the gentry… and no doubt very good at it as well!
Richard claims that the sheds we have are in and around the City of Peterborough are now way too small and in his seemingly well reasoned article in the Peterborough Evening Telegraph  Business Section (Tuesday, 21st June 2011) he puts the case for larger rectangular monsters to surround and eventually choke the very life out of this great City.
Let me explain, the reason for building larger sheds is that as the new generation of shed technology is for ‘just in time’ storage, picking and assembly of orders, most of the sheds are therefore automatic using robotics not humans….

A point Richard Jonrd fails to make and he quickly glosses over the concept of  automatic warehouses or megasheds,  they employ very few people! ‘So of little practical value to the residents of , as few worthwhile jobs for bright people will be created.
Like the ‘sheds’ that have gone before and now not deemed big enough, the new generation of ‘sheds’ will in turn have their day as trends change and they also become equally unloved and empty. You can see the tumbleweed already…

I say this with the prospect of a soulless Magna Park development rising on my Stanground doorstep, luckily for us residents at a crucial stage the developer was sold to Dubai World [DW], which in turn rapidly developed a whole heap of financial problems and Dubai also now has to contend with the continuing prospect of civil unrest as the Arab Spring round of national protests gathers apace.
Dubai World is frankly very short of cash and reliant on bail outs from wealthy neighbouring Arab states.  DW is currently attempting to float on the London Stock Market as a way of raising cash but with the best will in the world, building larger ‘sheds’ must come near the bottom of the pile of cash demands.
is still well placed, as being within commuting distance of (45 minutes by train) so it stands to reason that what is needed is quality housing on attractive estates and an offer from City Hall that upgrades our City Centre to world class status. (The hamburger van in will really have to go!).
The introduction of a University is a move in the right direction and an understanding by the agencies tasked with promoting that there is more to this city than TK Maxx and Poundland.  We have a fascinating history, a world class cathedral, chocolate box villages surrounding the centre and a young hungry international workforce. We need to attract skilled trades, engineering firms, the professions, tourism, in fact everything that our shedman Richard Jonrd would hate.

But he might like to explore the idea of bringing an airport closer to on the lines of the compact docklands . Just how flat do the fens have to be? He should also be looking at emerging media and digital industries. The BBC might be moving wholesale out of TVC in West London for political reasons, to Media City rented premises in the recognised gun, crime and gang capital of England which is Salford (just outside of Manchester) but there is no need for the thousands of small to medium sized creative media support firms to physically move that close to its major Salford based customer.

London to Salford would be a big travel stretch but Peterborough is just so well placed that either end destination could make brilliant and profitable use of a Peterborough Media Village together with a 21st Century creative technologies campuSo let us leave the ‘sheds’ for pensioners to happily potter around in and think outside of the box that will never be of ‘magna’ proportions, well not if we can