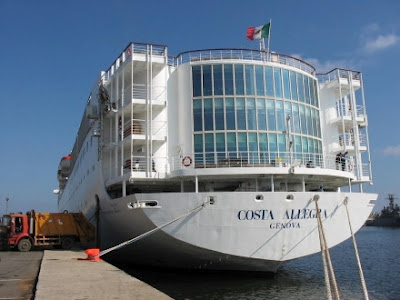 Julian Bray reports: The striken cruise ship Costa Allegra without power for three days when a generator plant fire knocked out all four generators, has now tied up (8am UK time) alongside in Mahe, Seychelles. Apart from some back up batteries and small portable generating sets -dropped by helicopter along with fresh food and water- the ship was in darkeness, no air conditioning, no vacuum toilets, no below decks lighting and no hot meals or drinks.  Passenger said they had lots of fresh fruit for the first wo days but they were reduced to salami sandwiches on day three.

The Costa Allegra would have tied up sooner, but the tow by a French trawler fishing boat took longer than expected as the French Captain of the towing vessel refused to let additional ocean going tugs take a line! It's all a matter of money, as the towing salvage fees would have to be shared.

But  as the ship is now tied up the dockside, the questions at  Costa Cruises  remain to be answered. The four generator sets are contained deep within the hull of this former container ship  and under normal circumstances cannot be easily removed and swapped over. They literally have to cut a hole in the side in order to slide them out.

Depending on the extent of the damage, there are still a few options open to the teams of engineers who will soon be swarming all over the vessel.

The cruise company can mount emergency auxillary power units on the open decks of the ship, and use them to provide sufficient energency power to get essential systems working, so the ship can steam under its own power to any nearby shipyard for repair.

The second option would be to  repair the generators and cables in situ, if the fire damage is localised.

The third option is to continue towing the now empty cruise ship to a shipyard, then consider further  options.

Whatever they do, this ship will not immediately be back in action, and in view of recent history the Carnival USA parent company might just decide to scrap the entire ship.

Modern cruise ships have adopted externally fitted electrical propeller pods  which can be rotated in most directions giving both motive power and precision steering. In fact one large cruise ship fitted with such a system continued with its cruise programme, with one of the external pod units out of action.

The cruise line simply discreetly missed out a single port of call on each cruise, with the ship travelling at a slower speed,  until there was a convenient break in the overall cruise programme, when in a three day layover, the ship was fitted with a completely new pod, and then returned to normal cruising.

Not likely to happen to the Costa Allegro which belongs to a an earlier generation of ships...this could well be the last commercial voyage. Meanwhile some 50 percent of the passengers have opted to spend a few days in the Seychelles, a brillant tourist boost for the islands as  Aliane St Ange from the Tourist Board, has been the ideal ambassador for the islands and apparently has been talking to the passengers directly for the last three days, as they have had teams on board the cruise ship!
Contributor: Media, Aviation, Politics & Travel Expert, Broadcaster Julian Bray UK Landline: 01733 345581 Mobile: 07944 217476 ISDN2 downline +44(0)1733 555 319 (HOME ISDN 017 33 55 53 19) G722/APT-X Dual Codecs Glensound C5
at March 01, 2012