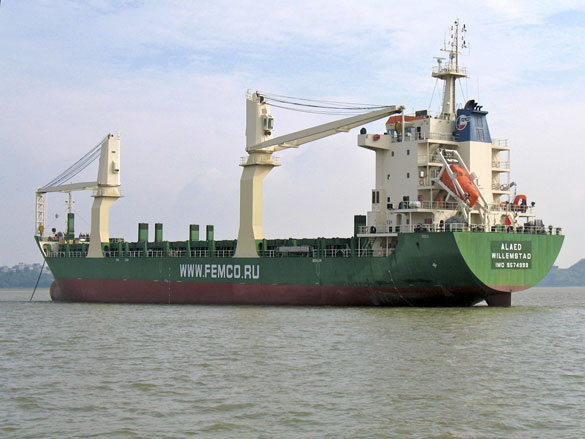 A Chinese built multi purpose container ship the MV ALAED, thought to be carrying a cargo of refurbished military helicopters to Syria has turned back after its U.K. insurer cancelled all  marine insurance contracts for the entire Femco oil and shipping group, officials claimed.

UK Foreign Secretary William Hague in a recent statement  suggested that the MV Alaed has “turned back now apparently toward Russia.”

Major UK marine insurer Standard Club had earlier cancelled its policy on all vessels owned by the Russian shipping and oil industry conglomerate  Femco, the cancellation including the MV Alaed, which is suspected to be carrying helicopters inside its cargo of  630 TEU containers to Syria.

“We have already informed the ship owner that their insurance cover ceased automatically in view of the nature of the voyage,” Standard Club said in a statement, reported by The Associated Press.

UK officials told the London based  insurer that it was a violation of European Union sanctions against the Syrian government, to continue to cover the shipment now that the contents of some of the 630 TEU ( Twenty Foot Equivalent) containers carried by the multi-purpose vessel was known.

Officials further claimed they monitoring the ship, and established that it collected the Soviet era Mi-25 helicopters for shipping back to Syria from the Baltic Sea port of Kaliningrad, where they were being serviced. The helicopters had been sold to the Syrian Government over 20 years ago by Soviet authorities.

Julian Bray Shipping Industry Commentator said: "By withdrawing insurance cover, the insurers effectively closed down Femco operations not only in shipping, but in their highly profitable oil industry support and drilling activities.  In addition, the fleet would be denied docking to refuel, since many port directorates do not allow ships within their waters without valid insurance cover in place.

"In addition the withdrawal of insurance means that Femco’s fleet of cargo and oil rig platform ships will not be covered for risks including damage to cargo, injury or death, running into quays and all classes of pollution.

"Most shipping insurance is provided by thirteen Protection and Indemnity (or P&I, clubs) which are members of the International Group of P&I clubs. Many are based in Britain, and while there are non-EU insurers, it is recognised  that it would be virtually impossible to secure replacement cover of the same."