Julian Bray, Cruise Industry Commentator, Broadcaster and Writer reports that another lawsuit has been filed in the aftermath of the Costa Concordia tragedy, this time against Carnival Corp. PLC, owner of the ill-fated cruise ship that ran aground and capsized earlier this year, killing 32.

The latest lawsuit alleges design faults on the Costa Concordia hampered its' evacuation, making it slow and problematic", according to a CBS report.

The suit, filed in a California court by Mississippi lawyer John Arthur Eaves, is seeking a minimum of $10 million for two unidentified plaintiffs, plus punitive damages, the report said.

"We filed a claim against Carnival and against the architects and designers for the propensity of Costa Concordia to roll and list, and because of the maze effect within the vessel," Mr Eaves said during  a press conference on Tuesday in Rome, Italy.

The Costa Concordia carried more than 4,000 passengers, and crew aboard when on Captains instructions the ship had deviated from filed voyage plans, hit submerged rocks, and capsized near the Tuscan island of Gilgio on Jan. 13th.

Many survivors and images from recovered video cameraphone footage  report confusion and seemingly confirm crew delays in relaying the severity of the accident, and giving out programmed evacuation instructions. 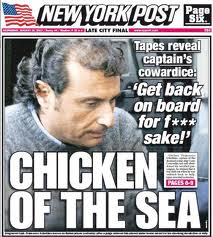 Almost six months after the incident, and as salvage workers prepare to right the wreck, cruise safety is still being investigated.

Pompano Beach-based Titan Salvage and Italian partner Micoperi were contracted to refloat and remove the crippled ship in one piece and have published a series of pictures to show how a complicated external structure and a series of  tanks will be welded onto the wreck, and the whole structure rolled back by sea bed winches and placed on a submerged platform base, which in turn is lifted and floated off by buoyancy bags.  An alternative cantilever self righting design application initially forming a series of upright beams placed across the open deck and through the superstructure, which by simply adding and moviong weights along the now extended outrigger, alters the wrecks centre of gravity and rolls the wreck back to its upright position has also been seen by C-DUCKNEWS which seems to be a better and much simpler alternative, and will leave no legacy damage to the marine environment. Once righted the beam weights are replaced on the outrigger with buoyancy aids.

On Friday, a spokeswoman for Miami-based Carnival Corp. said she couldn't comment on pending litigation. A representative for Costa said the Italian cruise operator would not be commenting.

"There is a legitimate issue whether the design of these cruise ships is reasonably safe," James Walker, a South Miami maritime lawyer said Friday.

In a recent blogpost, Walker questioned whether modern cruise ships were "top-heavy" and were "being designed more dangerously by increasing their size to pile more and more passengers aboard."

He wrote: "The 'floating condos,' as some call them, seem to be out-of-proportionally tall, perched precariously on a hull, which seems incapable of safely supporting a structure towering hundreds of feet into the air."

Of recent legal maneuverings, Walker said attorneys for Concordia passengers and crew were looking for creative ways to file lawsuits in the United States against Carnival.

He recalled a lawsuit filed by Eaves in federal court in Galveston, Texas, in March, which resulted in the brief seizure of a Carnival Cruise Lines ship.

"Eaves is trying to be creative again and explore another way to hold Carnival responsible."

As reported above, The US-based Eaves law firm has launched the action, against Carnival and the architects behind the ship's design being sued for punitive damages.  They are said to be part of a collective of lawyers representing 150 passengers from the stricken liner. Their claim centres on the suggestion that the vessel had been designed in a way that made it "top heavy" and as such, more likely to roll.

The legal team is also claiming that Carnival controlled or influenced the design of the Costa Concordia to cater to its commercial needs rather than good marine safety.

In particular, they claim that the shallow draught of the ship, the area below the waterline, not only made the vessel unstable but also meant that when it did tip over, many of the lifeboats were unusable.

Speaking at a press conference in Rome, lawyer John Arthur Eaves said: "The sad tragedy is the race to build the biggest ship with the shallowest hulls and room for the most passengers. When will it stop?

"We decided we must file this complaint to stop a race which is destroying safety."