Iranian crude inside shipping containers? Whatever next!

Julian Bray reports: The measures to impose sanctions on Iran were again tightened by the European Community last week, but there are still gaping holes in the sanctions process and ironically Iranian shipping is enjoying an unexpected  increase in business denied to (sanctions observing) members of the European community.

Japan for example didn't sign up and they are Irans' third largest customer for crude and refined oil products. The economic turmoil in Japan is given as a reason, and indeed as I discussed it with Kai Ryssdal on America Public Medias' [APM]  influential Marketplace programme. ( APM has over 18 million listeners around the world. The programme aired  earlier today.) The US agreed exemptions for 18 countries including India, South Korea, Sri Lanka, Malaysia,Taiwan, Turkey and South Africa.

Japan imports some 350,000 barrels of crude oil A DAY, and if that was cut off then Saudi Arabia and Qatar would be asked to fill the vacuum, the only problem being that its still not know if they have the capacity to provide it.

The sanctions spurred on by the USA, also cause a huge problem for the UK, as the measure will drive up the world wide price of crude and that in turn directly affects this cold, rain sodden island.

Already UK dairy cattle are being housed in winters quarters and grazing on winter cake feed as the pastures are just too wet, and within days the cattle would turn the whole lot into a nationwide mud bath, as we have seen at the recent UK F1 Grand Prix held at Silverstone, and witnessed seemingly endless episodes of flash surface water flooding, as the English and Welsh Environment Agency stands helplessly by. Still we can at least rejoice that UK Drought Orders have been cancelled along with the hosepipe ban for gardeners. Even if the hosepipe is currently under five feet of water mixed with excrement flowing from millions of popped manhole covers and overworked sewerage systems.

The prime cause of  the sanctions again Iran are of course that country's secretive nuclear energy program,  the West suggests it contains a military element, and therefore an emerging nuclear threat to 'free' world security.  But what is unusual is that Japan has eased the way for the Iranian Crude, and is also making money out of it in terms of insurances 'invisibles' at the same time, by Japanese Insurers who have signalled an uplift of 30 per cent in cargo and hull cover for shipping.

You might say this comes directly out of the pocket of Lloyds in London, where the majority of world shipping insurance risk business is transacted. Clearly more Japanese tankers will now transport Iranian crude.   The Japanese measures allow two supertankers at  a time effectively doubling tanker capacity from Iranian wells to 200,000 barrels. The NITC (National Iranian Tanker Company) has at the last count some 40 tankers of 100,000 to 300,000 [tonnes] capacity. Some are also being used as floating storage for the Iranian crude product, or ready to fill any 'just in time'  requests by the exempted countries, and neatly manipulating oil futures and world prices, but then who would have thought of that? 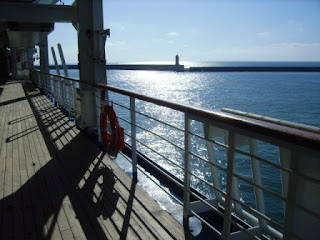 Kai Ryssdal: It's been, what, years now, that Europe and the United States have been imposing economic sanctions on Iran over its nuclear program. Usually without a lot of impact because Iran has so much crude oil to sell. Now the EU's come up with a free market approach, sort of NO more insurance for the tankers that carry Iranian oil, which actually might be working.

Julian Bray covers the cruise and shipping industries from London. Good to have you with us.

Julian Bray: Good to be here with you.

Ryssdal: Is it as simple as the European Union saying, you can't buy Iranian oil, or is it using another enforcement mechanism?

Bray: Well, the enforcement mechanism is very, very simple. What they are doing is they are saying, we won't insure you, and so what actually happens is as most of the insurance is carried out in London, it is a very easy bar to put in place because, quite simply, if a tanker goes into a port and hasn't got insurance, then of course, it will be seized. So what has happened is that Tehran has also decided to go into the insurance market, so there are other ways of doing these things. Of course you can always reflag ships, which means instead of having your own flag on it, you put a flag of convenience, and therefore your ship, say, becomes part of the state of Moldova, or something like that.


Ryssdal: I thought Moldova was landlocked.

Bray: Well no reason why they can't have ships.

Ryssdal: That's right [laughs]. This does present the Iranians with a problem because they are pumping all this oil and can only see part of it and they have to put it some place.

Bray: Well what they are doing of course, if they are not sticking it into spare tankers, they are actually cutting production. Now the problem in the UK, of course, we're an Island and we're actually a very cold little country, and we do actually need the heating during the winter or energy in the summer as well. So this is going to affect our oil prices, it is going to affect the price of every available good and services that we buy.

Ryssdal: The whole economy. Does this insurance mechanism, that the EU is using, does it lend itself to cheating, I guess would be the word? There's got to be all kinds of ways?

Bray: Well let me put it like this, it's sort of creative accounting. You don't actually have to pay in cash. So they will actually say, we'll come to a bartered arrangement or it might be an offset arrangement through a third country, which of course is a form of cheating. But the whole point is will they get the oil, and so if they, shall we say, get it the neighboring country and it's a short trip over the border -- and also I did hear that some people are refitting standard shipping containers, putting a kind of vinyl liner inside, and are actually putting the crude inside shipping containers. Now that's very, very crafty.

Ryssdal: Wow, and what could possibly go wrong with a vinyl liner inside a steel shipping container. Julian Bray in London, Julian, thanks very much.


AMERICAN PUBLIC MEDIA
On the air.
On the Web.
Around the world.


More than 800 stations reaching over 17 million listeners carry our programs each week.


Among its portfolio of more than 20 nationally distributed programs are such public radio staples as the BBC World Service, A Prairie Home Companion®, Marketplace®, Marketplace Money®, The Splendid Table® On Being™ and special reports produced by our national documentary unit, American RadioWorks®.