GUILTY! HUHNE FROM MP TO HMP

As disgraced Chris Huhne MP, the former Coalition Government Minister becomes Christopher Huhne HMP and wakes up this morning in his cell, behind bars, in the medical wing of the Victorian mouse infested Wandsworth Prison, we wondered what is it really like to enter into the UK prison system, for the very first time?  We asked a reformed 'old lag' (we'll call him Charlie) for a run down of the process.

Charlies' Tale: The trial is over, and the Judge utters the words "Take him (her) down."  In some courtrooms, the stairs to the holding cells below are inside the dock, so you don't actually leave the dock, your custody continues... These days, the dock is surrounded by armour glass plates - more for the protection of court officials, as some offenders, have in the past been known to vault the old style open dock, and make a run for it.. 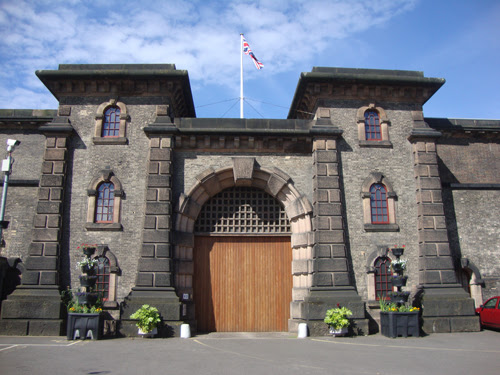 The next part of the process of entering the 'system' as its called, is in many ways dehumanising. The holding cells are little more than single cubicles, more like an old style enclosed telephone box, same stale urine smell, with a hard bench seat, and then you wait and wait, as the prison van does the rounds of several courts.

Heavy duty HMP issue Handcuffs are put on, with your hands in front, and a third cuff is applied, the other end on the wrist of the private company security escort. Strange how they get a leather protective cuff sleeve, but the prisoner has to contend with bare metal.


HMP
You are led up, and into the back of the van by your escort, and locked inside another small booth with yet another hard seat and a smoked plexiglass window. No seat belts either. The van moves off, then  unexpectedly a bright flash at the window, you find out later photographers, hold their flash cameras to each window in the hope they can get a picture. These are usually terrible images preserved for eternity, as you sit there contemplating your fate.

The journey through the streets of London, takes seemingly hours, but then you notice other prison vans, dozens of them, and you've arrived, but not at the prison. it's a huge 'secret' interchange clearing police station on several levels somewhere in Lambeth.

You are decanted from the van, cuffs removed and into a large holding cell with around 20 or 30 others, all destined for the same prison.  The numbers start to contract,  as you are then transferred to another prison van, and this will finally take you directly to your designated prison.

On arrival, as the prison gates close behind you, another set opens - a further delay as the reception process begins.

The surroundings are drab, but its a busy place, harsh white lighting, and taking it all in occupies your mind. Your identity established, the charges and also the sentence are read aloud to you. You are asked if you understand, or have any comment to make about your treatment so far. You are not really expected to make a response - more a box ticking exercise.

Talking of boxes, your box of possessions are examined, and if approved transferred into a polythene bag, prohibited items are confiscated and your 'civi' clothes are taken from you boxed with your name to await your release, no matter how many years down the line that may be.

An intimate 'all cavities' inspection takes place, this is the lowest part of the whole wretched process but you do feel for the 'screw' (jargon for thumbscrew something they used to apply in years gone by...) spending all day bending over with a torch ....  a quick shower, mercifully the water is tepid, tiny rough towel and you struggle into your prison kit, none of it fits and the elastic on the underpants is years past its sell by date. The 'trustee' on reception duty helpfully tells you that you can probably get a slightly better fitting set later on in the week. He's telling porkies of course, it'll be 2 weeks before a change is possible.

Its about 8pm by now and the process from court to completing 'reception'  has taken a good four hours. A mug of tea and a bun is offered, it's never tasted so good....

Entering the wing of an old Victorian radial jail is 'Cathedral' like, the sheer size of it, just hits you. It works on a spoke and hub system, the various wings radiating out from the central hub. Clutching your now few possessions, prison issue blankets and sheets, you are finally led to your cell, it might be five levels up, all stairs.

The cell door 'bangs up' behind you.  It's the medical wing for the first night at least, you'll be in a cell for two with a longer term but hopefully stable inmate, but then why is 'he' in the medical wing? ..... The card in the holder outside the cell door indicates to staff  that you are both on Suicide Watch, door peep hole inspections every 20 minutes, around the clock.... and the cell lights stay on all night.

The only way to get off that, and out of the medical wing, into the general convicted population, is to pass both the medical and psychiatric examination. Your cell mate - temporary - you hope, after all he's on Suicide Watch too - tells you that the big triple cell on level three, once housed the gallows....still working, but the component parts are now housed in the Prison museum at Rugby. They could always be reinstated, he says.  Gulp! You tend to keep your eyes wide open, that first night...

A few bits of knowledge to help Huhne HMP feel at home.

Doing Bird - short for cockney rhyming slang for birdlime ie time. Birdlime was at one time poured over the executed bodies of convicts, to help decomposition in their unmarked graves, and to foil bodysnatchers who would sell the fresh cadavers to hospitals.

Snout - Cigarettes or rolling tobacco  a form of currency inside. So called as at one time prisons had totally silent regimes and a convict would simply tap his nose (ie snout) if he wanted to borrow or have a drag from a cigarette.

Banged up - Cells doors being locked and unlocked, goes on all day and evening. Its is a very distinctive sound.

On Rule 43 (now Rule 45) Prisoner asks for solitary confinement for safety, and segregated  away from general population.   Chris Huhne HMP could well ask for this within days,

Slop out -  Guess...but most cells have 'facilities' these days...

Get Out of Jail Card  - likely to be found in the battered prison issue Monopoly kit - Hint: It won't work.

Screw - Term privately applied to Prison Officers by inmates said to refer to a time when thumbscrews were routinely used as a form of control and usually deliberately overtightened.

Run - A distant rumble usually getting much louder, after an incident when all officers run into your wing to restore order. If this happens, Huhne HMP would be advised to rapid find and stay inside his cell.

They should both complete the full term. Had Mrs Huhne aka Pryce not wanted revenge this would all have been hushed up! Huhne would have again challengfed for the leadership of the Lib Dems....