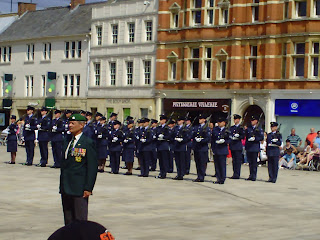 North Cambridgeshire
Julian Bray writes: I had a long and interesting conversation with David Harvey managing editor of BBC Cambridgeshire when he called earlier today, picking up on comments in the PBROTRIB news post, and in return I constructively put over the real concerns from this City, all following on from the PBROTrib blog suggesting the BBC station is pulling out of Peterborough, and the 'Cambridgecentric' resident mafia has in effect made a bloodless takeover, and we on the edge of the well heeled 'shires, relegated to a battered bin marked 'North Cambridgeshire.'

Curiously David made no mention of his meeting earlier this week with Stewart Jackson MP.

The substance of the blog is still as they say, "bang on the money", and sadly we seem to know more about what is going on, than the local troops have been told.

Certainly the BBC studio in Peterborough, as we know it, will close down in October, but Managing Editor David Harvey suggests that other systems might be put in place along with a physical base. I'm not totally convinced by his position, but he is running the show, and at best, I am just an interested observer, we do after all own the Corporation...

To a great degree we have to understand, David Harvey is working to a very narrow set of guidelines imposed on him, both in policy and money terms, hopefully being more strategic in his remit than operationally hands on. Perhaps in the overall scheme of things Peterborough isn't that important to the long term BBC corporate planners?

Perhaps the new DG - a former well respected BBC head of radio news - will in time clarify some of the dubious technofuzz noise that has bedevilled the Corporation, and looted funding from programme making over the last decade.

However whan a high visibility politican publicly jumps up and down, a previously twinned Breakfast Show, boiled down into one, has now suddenly been taken apart and now again broadcasts as two elements or strands. So it is possible. Perhaps we need in our camp, a political heavy hitter and a known dining companion of the Chair of the BBC Trust to make it happen here. Who knows?

To be fair to all, and as a infoRmation hub ( our sister blog) the PBROTrib is more than happy to put David Harveys points forward, and any other he may care to make in future.

It might well reflect the different use of future technology, and the fact that a BBC reporter could be armed with nothing more than a beefed up i-fone possibly with a LuciLive app [ IMHO no patch on ISDN - frequent drop outs - trust me] but does it address the core concerns that the spoken word - a crucial part of the BBC local station remit - will in future carry an equitable selection of our 'North Cambridgeshire' views and very real concerns?

We have installed in our Peterborough City Council Town Hall, a 'robotic voting' majority party who have all but managed to kill off debate in council. Many of the decisions being agreed before the council meeting takes place, and the rubber stamping of the decision by a sea of hands.

Cambridgeshire County Council however has a wholly different political make up, demographic and approach to life.

They have County councillors who are confusingly on BBC Cambs routinely called councillors, and speak as if their policy/ appeal covers the wholly different Unitary Authority of the City of Peterborough, when it clearly does not. It probaby works the other way round to the refined ears of the 'shires audience.

Peterborough has City Councillors. Cambridgecentric presenters daily refer to their journey into work, and almost hourly the perils of travelling on the A14, something called Parkers Piece ( in Peterborough, that would be a slice of Pizza? ) and a possible cleric called Jesus Green. Royston also gets a good plug in the mid mornings So easily identified as to where the broadcast studio is from..ie not on our Manor...

Rather than debate each point here, this is the core message David Harvey wishes to get over with some of our comments:


>>> BBC Radio Cambridgeshire is not pulling out of broadcasting from Peterborough and will continue to maintain an office, reporters and the ability to make radio and television content from Peterborough.

>>>> No person is being ‘let go’ and staffing levels will remain as they are.

>>>> The number of reporters available to go out on stories will remain as now. BBC Look East will also continue to have a reporter in Peterborough.

>>>> The Breakfast Show, like all of our daytime shows, has already been broadcast from Cambridge, without any noticeable difference in quality or story count relating to content from Peterborough.

>>> We don’t talk on-air about which studio the show is broadcast from, because our studio base does not impact on the material in the programme.

As ever what do you think?