UPDATE: 6/02/2015 The plane crash in Taiwan has killed at least 35 people, according to [06/05/2015] figures, while others are still missing.
The Turboprop ATR 72-600, was carrying 58 people (including passengers and crew),  cartwheeled into the river near the capital Taipei, a few minutes after taking off. The plane was conducting a domestic flight from Taipei to Kinmen island archipelago, reports the South China Morning Post.
Passengers who were not injured were able to put on life jackets and get out into the river, some were pulled out by rescuers.
The blackbox data and voice recorders of a TransAsia plane that crashed into a river in Taipei showed that the pilot called "mayday" and announced an engine flameout 35 seconds after noticing engine failure.
About one minute after the announced flameout, the black boxes stopped recording. Later reports suggest that one engine flamed out just 37 seconds into flight then the second engine abruptly stopped functioning.
Local sources suggest both engines were swapped out shortly after its new delivery ie new engines retrofitted, the aircraft being less than 2 years old.
Thirty-one of the passengers were mainland Chinese tourists. Many were from the city of Xiamen. The photo sequence shows the aircraft losing control and tilting fully to its side, its left wing breaking as it hits a bridge then plummeting into the shallow river.
Julian Bray comments: Clearly the pilot used great professional skills to miss the high density apartment blocks and was seeking to put down his stricken plane in the River in order to save lives. His body was recovered, strapped into the pilots seat and still holding onto the controls.
Even without the blacks boxes to confirm the actions there was clearly little the pilot and co-pilot could do.  Brave and heroic actions by the crew and a remarkable series of rescue stories being  revealed. Our condolences to all concerned. 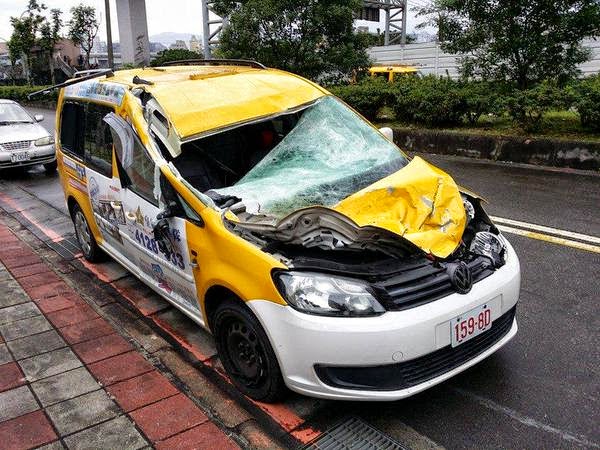 Some sixteen (later revised to 35 plus) people comprising passengers and crew have died when a TransAsia Airways turbo-prop plane clipped a bridge, narrowly missed road traffic, but hit a taxi (see above), and then crashed into a Taiwanese river near the capital city, Taipei. many more were injured, according to CNA - Central News Agency - Taiwan. 28 have so far been rescued.
Dramatic video of the final moments of the aircraft have been aired which shows the almost side on vertical steep banking, the aircraft was performing.

Fifty-eight people in all boarded the domestic flight, several sustained injuries in addition to those who died

Taiwan's Central News Agency (CNA) broadcast video clips of the plane, taken by passing motorists, the forward section is seen half submerged in the Keelung river. Rescuers waist deep in water are still extracting people from the wrecked fuselage ripped open as it came to rest in the water.

The aircraft had just taken off from Songshan Airport on a heading heading to Kinmen islands, just off the coast of the south-eastern Chinese city of Xiamen. Air Trafic Controllers lost contact at 10:55hrs, local time (02:55hrs GMT).

Footage of the plane apparently filmed from inside passing cars showed it banking sharply, hitting a taxi and clipping the bridge before crashing into the river.

Shortly after takeoff at 10:52L (02:52Z) the aircraft began to roll left, the crew radioed "Mayday! Mayday! Engine Flame Out!" at 10:53L with no further transmission.

The aircraft reached a maximum height of about 1050 feet (corrected for QNH), lost height, struck a taxi, hit Huangdong Boulevard Viaduct with its left wing at nearly 90 degrees of bank angle at about 10:55L (02:55Z) and impacted the water of the Keelung River near the Nankang Software Park.

It came to rest inverted, about 2.9nm from the end of runway 10. 14 people were initially rescued alive, 16 (later revised to 35) occupants were killed, 28 people are missing and feared trapped inside the wreckage almost submerged in the river.

The airline reported at 17:00L that 16 occupants have been killed, 13 occupants are being treated in various hospitals, one survivor has already been released from hospital care. The accident ATR-72-600 has been in service for less than a year and underwent last regular maintenance on Jan 26th 2015.

Taiwan's ASC have dispatched investigators on site and opened an investigation.