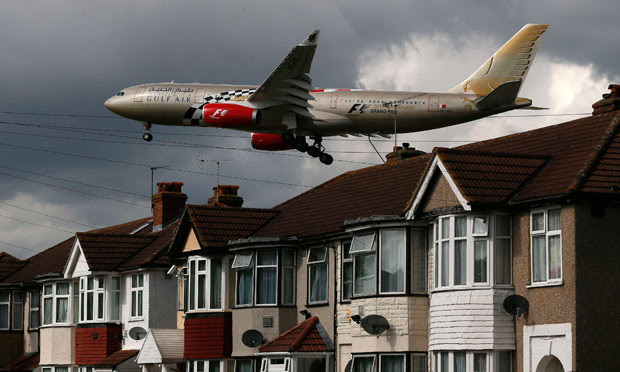 Julian Bray writes: The Airports Commission (some say with fingers firmly crossed) has recommended - in the 400 page report -you don't get a lot for £20million these days - building a third runway at London Heathrow Airport, some detractors call it an impossible dream and that Sir Howard has effectively 'dropped the ball' . David Cameron after all said "NO THIRD RUNWAY [ at Heathrow ]NO IF's NO BUT's". however the prime minister during the weekly PMQs, has now confirmed 'a decision w.ill be made by the end of this year'.


A ban on night flights on the new north-west runway in a scheme it speculatively claims will add £147bn to the UK economy, and estimates it will support up to 70,000 new jobs by 2050. Realistically the actual job target will be much lower, as specialist sub contractors will bring in their own expert workforces from elsewhere in the world.


Politicians are however out in force in radio and television studios, possibly soap boxes on street corners; they are very clear that  Conservative MPs will vote against the proposals with Richmond MP Zac Goldsmith confirming that if the proposal goes through he will resign triggering a by-election in his constituency. The MP is confident this will never happen as it would be political suicide for many sitting MPs who just happen to be .....Conservatives!! Mr Goldsmith during PMQ's later asked a question suggesting the Airport Commission already had the answer and simply worked spending £20million to create a report to support that answer....

The government set-up the Commission,  which has spent more than £20 million to reach its conclusion and chaired by the former Director General of the Institute of Directors and then Head of the Financial Services Authority Sir Howard Davies, to investigate options for future expansion. In December 2013, it rejected plans put forward by London Mayor Boris Johnson for a new 'island' hub airport in the Thames Estuary and shortlisted proposals to expand Heathrow and Gatwick Airports.


Further expansion at Heathrow is opposed by the London Mayor Boris Johnson and all 25 members of the London Assembly.
The Commission’s report said any new runway at Heathrow should be restricted to day use and that there should be a “legally binding ‘noise envelope’ putting firm limits on the level of noise created by the airport”.  Clearly Sir Howard has added this as a sop, as the new generation of jet aircraft are already meeting reduced noise standards and the CAA is putting in place a new cascade landing strategy effectively funnelling in aircraft from all directions rather than a single flight path.. Bravely The Commission also called for ministers to rule-out building a fourth runway.


Sir Howard Davies said: "Over the past 2 and a half years, the Airports Commission has reviewed the evidence without preconceptions, consulted widely, and followed an inclusive and integrated process.  However some say Sir Howard hasn't consulted nearly widely enough, placed too much emphasis on a zero carbon brief and omitted the TFL submissions which are firmly against the expansion of Heathrow. It also fails to discuss the increasing effect of additional air cargo movements in and out of the airport on an already clogged up west London road networks. Currently airport cargo sheds are sited alongside the airport perimeter road network feeding underneath the proposed North west runway.


“At the end of this extensive work programme our conclusions are clear and unanimous: the best answer is to expand Heathrow’s capacity through a new northwest runway.”
He added: Heathrow is best-placed to provide the type of capacity which is most urgently required: long haul destinations to new markets. It provides the greatest benefits for business passengers, freight operators and the broader economy.”


Downing Street says ministers will study the report and avoid making “a snap judgement”.
Louise Ellman MP, Chair of the Commons transport select committee, said the Commission’s recommendation “echo those of the Transport Committee I chaired in the last Parliament, when we concluded that a third runway at Heathrow was necessary for the UK to maintain its status as an international aviation hub.”
She added: “My Committee in the last Parliament set a challenge for the 2015 Government to quickly get to grips with the recommendations of the Airports Commission and not seek excuses for further delay.
“For too long airport expansion has been viewed as too difficult, with decisions deferred and postponed. To do so again would present serious risks for the UK’s economy.”
Ravi Govindia, leader of the council in Wandsworth council, claimed the Commission had “failed to understand the legal, political and environmental barriers that ensure Heathrow expansion will never happen.”
The borough is beneath the flightpath of the airport and its residents would be among those affected by increased noise.
Mr Govindia said: “A third runway would inevitably push Heathrow’s world leading noise and pollution impacts to new highs and severely damage the quality of life across the UK’s most densely populated region.
“The environmental controls Davies suggests are inadequate, untested and in some cases undeliverable.”
Liberal Democrat London Assembly member Caroline Pidgeon said today’s report “simply repeats many outdated arguments in opting for a third Heathrow runway.”
She said many a third Heathrow runway will have devastating consequences “in terms of noise and increased air pollution” regardless of the number and nature of conditions put in place for its use.
“By advocating a third Heathrow runway it seems all the evidence for better using the extensive spare airport capacity at airports such as Stansted have been rejected.  The commission’s inability to consider a future with less internal and European flights is also depressing.”
Labour’s Assembly transport spokesperson Val Shawcross said: “We will now take the time to examine Sir Howard’s findings closely but it is clear that any decision on airport expansion, whilst controversial, has to be evidence based.