Egyptian investigators are today reporting "they have found no evidence of terrorism so far in the Russian passenger jet crash that killed 224 passengers and crew onboard. 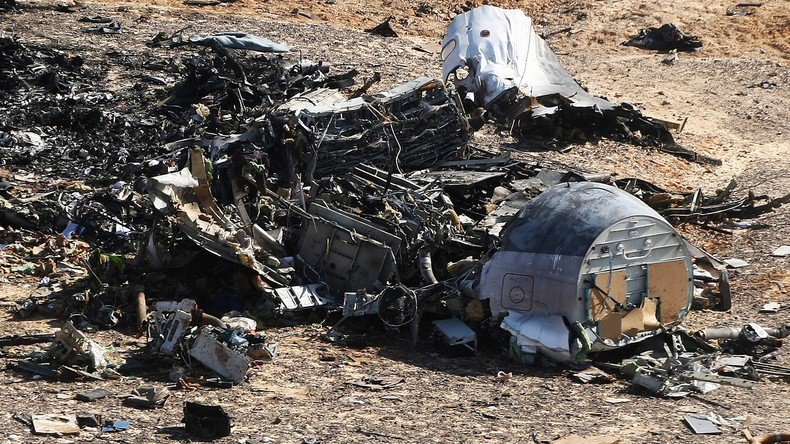 The Egyptian statement issued by Egypt's lead investigator Ayman Al-Muqaddam directly contradicts Moscow's earlier assertion that a bomb was on the plane; the preliminary report by the Civil Aviation Ministry on Monday said the investigation is still ongoing so according to officials the position may still change.

"The technical investigation committee has not found anything thus far that indicates illegitimate interference or an act of terrorism,"  Lead investigator Ayman Al-Muqaddam said in the report.

Russia meanwhile claimed it had found evidence that a bomb caused the crash. The ISIS terror group also claimed responsibility for downing the plane. The incident has caused severe repercussions for the Sharm el sheikh holiday resort, with empty hotels, deserted beaches and widespread unemployment. Russia has also banned its aircraft from Egyptian airspace, but recently allowed a few number of cargo flights, between the two countries.

Monarch airlines also confirmed today (Monday Dec 14) they have extended their own flight ban to Sharm el sheikh, Egypt  until January 24th 2016. The airline will then review the position.

Captain Ayman ElMokaddem, chief of the International investigation committee (Investigator in Charge), investigating the accident of the Metrojet airplane declared that, as a progress in the investigation work, and in accordance with Annex 13 to the Convention on International Civil Aviation ICAO, the committee has finished the "Preliminary Report".

This report has been sent to all Accredited Representatives for the States that have the right to participate in the investigation, in addition to the International Civil Aviation Organization ICAO. Captain ElMokaddem added that the report includes 19 typical articles well known in accidents investigations, and includes the preliminary information that is available to the investigation committee up till this date.

The report includes also some information that will be subjected to developments through the next phases of investigation. Captain El Mokaddem indicated that the scope of investigation for the wreckage parts has extended for more than 16 kilometers from the main wreckage site. He assured also that the members of the forensic medicine task group within the investigation committee had received the reports regarding the examination of the bodies made by the forensic doctors.

The committee is waiting for the comparison reports from the Russian side to identify the victims status after knowing the DNA analysis for their families and kins. The committee received support from Egyptian experts, faculty of engineering, Cairo University for producing photos for the airplane wreckage, using a three dimensional advanced camera, to assist in making a record for the status and shape of the wreckage and its relative positions at the impact site.

About 30 working hours were dedicated to this task. In addition, a specialized team from the "Metallurgy Center for Researches and Development" had visited the wreckage site for the visual examination, preparing for the second phase of wreckage analysis after transferring it to Cairo.

The committee has offered the full opportunity to all the concerned parties including the insurance company officials and the Russian working team to examine the wreckage at the site.

This was done in accordance with the international regulations, before transferring the wreckage from the site for the following investigation phases. Flight Data Recorder FDR information indicated that all the flights made by this airplane, five days before the accident were between Russian airports and Egyptian airports.

For the flight just before the accident flight, the airplane departed from Samara Russia and landed in Sharm El Sheik.

The units had been transferred to Cairo for the purpose of thorough investigation by the specialized task groups. The operation group within the investigation committee, with the Russian side, had examined the pilots’ information related to their flying licenses and their medical check.

Detailed examinations of the information related to the pilots training are being done now, after translating this information from the Russian language. The technical status, and the detailed repairs that were carried out on the airplane, its structure, systems and engines since the date of production up to the date of the accident, are being studied now.

This study is supported by the relevant airplane technical documents and records delivered from the Russian side. This study needs plenty of time, as the airplane had been produced on 1997. The wreckage group within the investigation committee, and for about 250 working hours, have done an extensive photography, identified the locations, sorted and classified the wreckage parts scattered within the wreckage site, developed a wreckage plan to deduce the different effects on each part of the airplane, linking this with the technical history to use that in the following investigation phase. Work in this area is still under progress.

Captain El Mokaddem added that, all the Accredited Representatives representing the states participating in the investigation have been granted all the rights that are defined in Annex 13 to the Convention on International Civil Aviation. Cooperation and communication with them are still in a continuation process to exchange information regarding the accident.

Fifteen trips to the wreckage site have been organized by the Egyptian Air force using helicopters. Coordination is still under progress with the Egyptian Army, to benefit from their capabilities so as to transfer the wreckage from the accident site, after completing all the required examinations, and to collect it in a secure place in Cairo that allow the committee to start new phases of investigation.

Captain El Mokaddem revealed that, the committee did not receive up till now any information indicating unlawful interference, consequently the committee continues its work regarding the technical investigation.  END