ALL ELECTRIC AVIATION ALREADY A REALITY; BUT IS THE UK EXCLUDED AS GERMANY & FRANCE STEAL A MARCH? 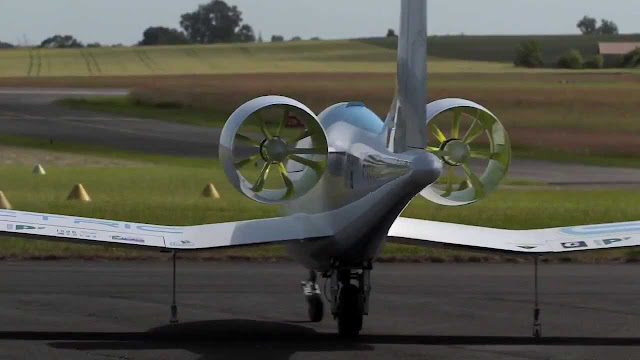 In a shock move that could negate the need for any  additional runways at Heathrow, Gatwick or anywhere for that matter and require a total worldwide financial rethink of the aviation business; including the possible concentration of major European hub related aviation research and development to Germany is caused by the news that Airbus and Siemens, are to collaborate creating .......   electrically-powered planes.

A team of 200 engineers from both companies are joining forces  developing electric propulsion units for planes designed to carry up to 100 passengers or a cargo weight equivalent.

The two CEO's, Tom Enders (Airbus)  and Joe Kaeser (Siemens) , have 'greenlighted' a major joint project towards the electrification of aviation, demonstrating the technical feasibility of several  hybrid/electric propulsion systems within 4 years, by 2020.

“Electric and electric-hybrid flight represent some of the biggest industrial challenges of our time, aiming at zero-emissions aviation.

"The progress we have achieved in this arena, together with our industrial and governmental partners, in only a few years is breath-taking, culminating in last year’s English Channel crossing of our all-electric E-Fan aircraft. Big thanks today particularly to the Bavarian Government and Minister Aigner for their support here in Ottobrunn”, said Tom Enders, CEO of Airbus Group.

The key, claim the project leaders, is the new 10kWh lithium-ion battery pack, comprising a liquid thermal control system and software which receives dispatch commands from a solar inverter.

Although the inexpensive  ($3,500) unit has still to win over traditionalists, the potential implications for multiple industries worldwide means that some countries will in effect leapfrog some established countries who are not early adopters.   The new battery could be the next technological leap in aviation, whereby  integrating aircraft electrical components, solves many current but pressing environmental concerns.
Hybrid-electric propulsion systems can both significantly reduce fuel consumption of aircraft and reduce noise.  European emissions targets aim for a 75 percent reduction of CO2 emissions by 2050, compared to the values for the year 2000.

These ambitious goals cannot realistically be achieved by conventional technologies.

Airbus Group and Siemens plan to jointly develop prototypes for several  propulsion systems with power classes ranging from a few 100 kilowatts up to 10 megawatts, and possibly much higher  i.e. for short, local/ regional city hopper rotations, with aircraft below 100 seats, helicopters or UAVs all ideal for classic short and medium-range journeys.

Both companies together with Austria’s Diamond Aircraft initially presented a hybrid aircraft in 2011. Since then, Siemens has been developing an electric engine specifically for aircraft, designed to supply five times the power but for the same weight.

Airbus Group has already been gathering operational experience with electrically powered aircraft since 2014 with the E-Fan, a full electric two-seater designed for training pilots.

Airbus Group intends to rapidly accelerate the programme with the extended resources of the planned E-Aircraft System House at Ottobrunn/Taufkirchen site, enabling  the development of components and system technologies.

Siemens is determined to establish hybrid-electric propulsion systems for aircraft as a future business. The partners have agreed to collaborate exclusively in selected development areas. Both terams will continue to work together with their current partners for electrically-driven small aircraft with fewer than 20 seats. The UK role in this is not defined, if at all, although the all-electric e-fan aircraft took off from England, for its record breaking all electric powered hop over to the European mainland.