UNITED AIRLINES PASSENGER 'KNOCKED OUT COLD' AND BLOOD DRIPPING FROM FACIAL WOUND, AS HE IS REMOVED BY POLICE AS PLANE IS OVERBOOKED AND SEVERAL SEATS NEEDED FOR TRANSIT AIR CREW! 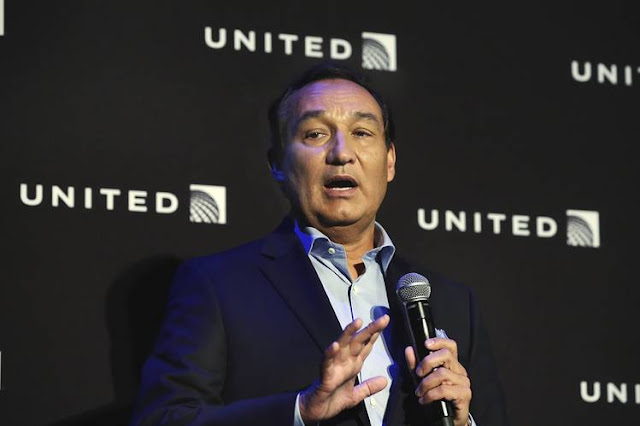 WHAT A DIFFERENCE A DAY MAKES: UNITED AIRLINES CEO NOW BELATEDLY PENS A VERY SORRY 'MIA CULPA' APOLOGY TO HIS STAFF AND CUSTOMERS; AS SHARE PRICE SLIDES, VIDEOS GO VIRAL AND BOUNCE ALL AROUND THE WORLD ..... ...TIME TO DIG OUT THE CV OSCAR!

Coming shortly after a furious row over a female occupying a discounted staff seat, but transgressing the airlines strict staff dress code by wearing leggings.....


... United Airlines AGAIN finds itself at the top of the news agenda after a passenger was forcibly removed from a United Airlines flight, as it was full and seats needed to be found for a UA relief transit flight crew...

The male passenger believed to be 69 years old and of Vietnamese origin, has been videoed (by several cameraphones) being roughly manhandled by three 'police' officers, and then on a second video shot from another cameraphone, the unlucky passenger dragged along the passenger cabin central corridor seemingly unconscious, and with blood pouring from a facial injury.

It is understood that one of the police officers, has now been placed on leave....

It is understood the police managed to remove the gentleman from the plane but it seems he escaped their clutches, only to run back up the steps and was briefly on board again.....


The clips have gone viral on social media, as the remaining passengers were distressed and loudly protested to the officers, whilst still filming, one sarcastically shouting "Good Job Officer."

From the clips, it appears that several cameraphones operated  by United Airlines passengers witnessed three men wearing baseball hats and jackets with POLICE written in white block letters across their backs, pulling a man vertically face down out of a seat, he clearly didn't want to co-operate, so the police officers used force, as the man by this time screaming and wailing was dragged from his designated seat, and in the process sustained an injury to his face.

All this seemingly happened because the airline had overbooked the flight and needed to get people to co-operate by leaving the plane and flying on a later flight.

From a legal standpoint the passenger, was in the wrong, and should have left the aircraft. That however might not work for the airlines public relations and marketing effort...

The flight was an internal USA flight from Chicago to Louisville, Kentucky on Sunday evening.
One passenger Audra Bridges, who was armed with her cameraphone, covertly videoed what happened from her nearby seated position, she later claimed the airline needed to remove passengers, so a standby crew, who had to be in Louisville the next day, could be seated.
They initially asked for volunteers from the fare paying passengers, they would normally be offered, as appropriate, an all expenses overnight stay and possible upgrades,  vouchers even but when no-one came forward.

The United Airlines computer (they say) randomly selected the names and seat numbers of four passengers, who by this time were already strapped into their seats ready for takeoff.

A couple were chosen and agreed to depart the plane, but when the man featured (in the several - now viral - on social media) video was called, he refused to budge, claiming he was a doctor, who was due to see patients in Louisville, the next morning.

The man was travelling with his wife, she had also been selected for 'deplaning' seemingly by the UA computer.
In one video clip, the three men who pull the passenger from the seat are carrying radio equipment and wearing security jackets. Other video clips confirm the security jacket is a clearly a POLICE jacket.
What happened next, is a mega PR nightmare scenario. The resulting global exposure initially wiped a billions bucks off the United Continental parent company bottom line. The video clips will be used by generations of future PR students to demonstrate how not to do it.

As the man is forcibly pulled at speed from his seat, his body launched face downwards, into the central aisle,  his head/nose/face appears to come into contact with the rigid metal arm rest of the aisle seat, across the aisle from his own now 'vacated' seat. At this point the passenger appears to have been 'knocked out cold' or suffering concussion ,as he is dragged away by his shoulders to the front of the aircraft.

As he is dragged down the aisle, now on his back with a bloodied lip, a female voice is heard shouting: “This is wrong. Oh my God, look at what you did to him.”

The same woman had earlier asked why the standby crew could not be driven to Louiseville.
“Everyone was shocked and appalled,” Audra Bridges told The Louisville Courier-Journal. “There were several children on the flight as well, they were very upset.”
She said a medical crew was brought on to tend to the man. The flight was delayed by around two hours.
In a later statement, United Airlines said: “Flight 3411 from Chicago to Louisville was overbooked. After our team looked for volunteers, one customer refused to leave the aircraft voluntarily and law enforcement (ie POLICE) was asked to come to the gate. We apologize for the overbook situation.”


United Airlines Chief executive Oscar Munoz later issued a statement about the “upsetting event” and half heartedly apologised. but a later uncompromising internal memo to staff appeared on social media and seemed to 'add gas to the fire' read it here: https://t.co/obVdl6G2E0
The following day Munoz dramatically altered his position and made a full apology, but clearly for a man voted Communicator of the Year by the USA PR Week trade magazine it was too little and way too late. History will tell if Munoz keeps his job and United ceases to be ridiculed on social media.
“Our team is moving with a sense of urgency to work with the authorities, and conduct our own detailed review of what happened,” he wrote.
“We are also reaching out to this passenger to talk directly to him and further address and resolve this situation.”

Julian Bray Aviation expert speaking early Tuesday Morning on 'Wake Up To Money' on BBC5LIVE , World Service, BBC Foyle, BBC Scotland and on many BBC Local Radio stations throughout the day commented: 'No doubt the airline will also wish to urgently view all the video footage, in this case clearly the camera cannot lie. It is however normal for airlines to routinely overbook allowing for cancellations.

'Normally the overbooking level is around 5 percent, with cancellations normally thought to be at 15 percent; this time however the unexpected extra seats demanded by the airline for the relief transit air crew, upset this calculation.

'The legal position is clear, the captain has absolute command over who or what is carried on his aircraft. So technically the passenger refusing to leave or being 'offloaded or deplaned' is breaking the law if he disobeys a lawful command from the commander ie the Captain. '

Later a leaked copy of a staff memo by the United CEO was posted:

Here is the full text of the email Munoz sent to company employees.

Dear Team,
Like you, I was upset to see and hear about what happened last night aboard United Express Flight 3411 headed from Chicago to Louisville.

While the facts and circumstances are still evolving, especially with respect to why this customer defied Chicago Aviation Security Officers the way he did, to give you a clearer picture of what transpired, I've included below a recap from the preliminary reports filed by our employees.

As you will read, this situation was unfortunately compounded when one of the passengers we politely asked to deplane refused and it became necessary to contact Chicago Aviation Security Officers to help.

Our employees followed established procedures for dealing with situations like this. While I deeply regret this situation arose, I also emphatically stand behind all of you, and I want to commend you for continuing to go above and beyond to ensure we fly right.

I do, however, believe there are lessons we can learn from this experience, and we are taking a close look at the circumstances surrounding this incident. Treating our customers and each other with respect and dignity is at the core of who we are, and we must always remember this no matter how challenging the situation.
Oscar


Clearly no truth in the rumour that United is actively considering marketing a new Fight Club Class...... BUT JUST WATCH WHAT HAPPENED TO UNITEDS SHARE PRICE ouch!
https://www.bloomberg.com/news/articles/2017-04-11/united-airlines-tumbles-as-social-media-storm-spreads-worldwide