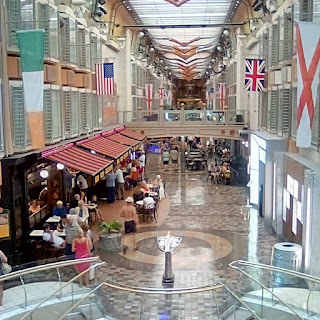 Julian Bray writes: I've just watched passengers video footage of a so called mutiny on board the Norwegian Spirit and the live comments of a couple who left the ship, they were speaking on the BBC #Victorialive TV programme.

The 'beef' seems to be several ports of call were missed due to inclement weather, as we have had the tail end of a series of USA originated hurricanes, at one point the ship spent five days at sea.

The vacuum toilet system backed up (this often happens if the passengers are unhappy, as they deliberately stuff unsuitable detritus down the loo as a protest!) and the advertised Iceland port of call missed, again due to weather, but the company substituted with stops in Scotland and Belfast. Some stops out if season and nothing open!

Passengers complained the food was stale as the ship was five days at sea. ... Nonsense of course, as the ship will have been fully provisioned for the entire cruise at Southampton, its initial departure port..

The female complainant said the crisps were stale (!!!) and the meat over five days old! Ha Ha! I'd hope my steak had been hanging for at least 10 -15 days to bring out the flavour!

That aside the Company had only offered a 25% discount against a future cruise, when the passengers were demanding cash refunds. Sadly for the passengers, they had signed the booking contract, so in effect not entitled to a penny.

So this is where goodwill comes in, and essentially its the skills of the cruise director rather than the Captain can save the day. On this voyage the Cruise Director clearly didn't have the confidence of the passengers and the on board management failed in moving quickly enough to calm matters down and putting on a diversionary entertainment programme or concessionary drinks/ cocktail party.

The Americans also complained their passports were taken, as they sometimes are for checking then given back.

The last time I did an almost identical route, we went up to Russia St Petersberg. It was November but the ship still had complaints from some passengers who had booked balcony cabins complaining that they could not use the balcony as it was far too cold! November, Russia, cold? Who would believe it!